because this week started off a little rough due to the "jackass" featured in my previous post, i have been way to frazzled and discombobulated to post the rest of the Halloween festivities that were enjoyed. but today is a better day. technaglass fixed my window bright and early this morning for a much better price then i thought it would be and my bank is taking care of all of the fraudulent transactions- so ...here is a happy post.

c. & i love to carve pumpkins (as mentioned in many a previous posts) c. loves to do the most difficult and challenging pattern that is available just to prove he is super awesome. after seriously 30 minutes of looking at patterns and evaluating the difficulty he finally settled on this freaky clown. i think he did an amazing job, like always. he is so incredibly talented! 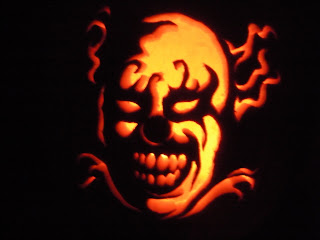 i decided to go a much more simple route this time- i did both the cute cupcake and the little angry baby face. i drew my own pattern for the cupcake pumpkin and i was more than pleased with the way it turned out. 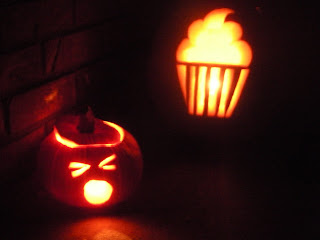 there was also "Witches Tea" at Gardner Village with all of the female cousins on the rogers side. it is always such a good time to get together with all the girls, get manis & pedis, and just laugh.
i think one of the best parts is shopping with my sisters & mom. we have so much fun together and always spend way to much money! i love it! 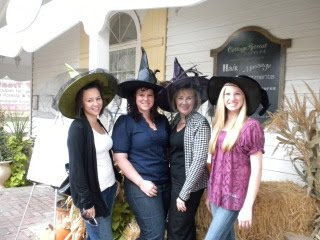 then the big day finally arrived! HALLOWEEN! the one day a year that you can be anyone you want to be and no one looks at you funny for painting yourself blue or wearing a tutu!

this year c. decided to be maurice, from little monsters. it is one of his all time favorite movies and he has wanted to be him for years. His costume was awesome! people were stopping him to take pictures. His mom made him a custom vest, and he did all of his own make-up.c. even cut his hair into a mohawk just to get all of the details right. he was very impressive! 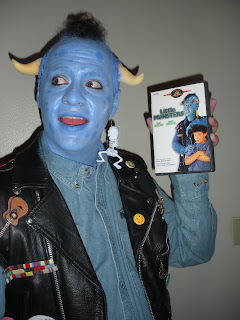 i went as a troll doll this year. yes that is a giant rhinestone on my belly button. i was pretty happy with the way it turned out. my sissy deni made this awesome tutu and let me borrow it.
Ruby had to be in every picture we took, i think she likes showing of her cool pumpkin t-shirt. 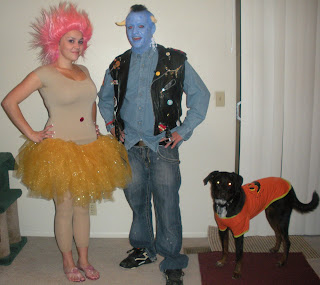 my parents had their annual halloween extravaganza at their house. this is all of the girls before the party started. me the troll doll. deni was "Hell on Wheels" she looked so super hot in her little devil outfit! my mom was a wench that was being turned into a vampire by my dad, they looked very fierce! and my youngest sister sami was Minnie mouse! she made her own costume and looked so adorable! 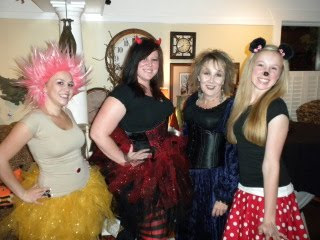 my dad was a classic vampire (think interview with a vampire era) - as mentioned before my mom is his wench that he is turning her. such an awesome couple costume. 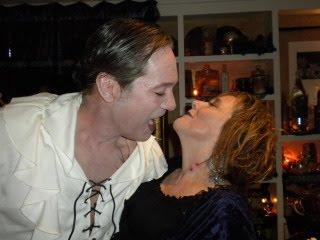 my sissy and i cinching my mom into her costume. i thought she was going to pass out from lack of oxygen-but hey its better to look good than to feel good. :) 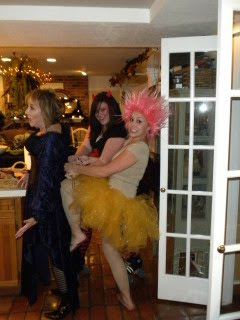 Labels: because i love him, family ties

Love love love the troll doll idea! And the awesome pumpkins! I didn't even dress up. I am so incredibly lame. 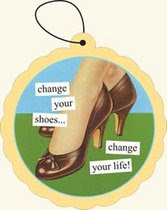